Sam’s parents disapproved of his plan saying it was a waste of college tuition. Nevertheless, Sam left well-known resort town Nha Trang and his ‘ideal’ job. Penniless and strong-willed, he packed up and set off.

That was in 2018. Sam’s parents, inhabitants of Dao Lon (Big Island) in Ly Son District of Quang Ngai, weren’t a bit pleased at the sight of him and his luggage in the front yard. The air was radically different from his previous home visits during university holidays or even when he freshly graduated. Tensions grew as brief bickering to unnerving fights invaded the household.

“I’m in my prime with no commitments, I will gladly start again if I fail,” persisted Sam. Not waiting for his parents’ blessing, he visited his maternal grandparents and asked for land to commence his homestay project.

It is a 15-minute canoe ride from Big Island to Small Island. Whereas Big Island is constantly flooded with people, Small Island bears a contrastingly deserted look.

Ly Son District is a combination of three islands including Big Island, Small Island, and the Mu Cu Islet.

In recent years, tourism in Ly Son peaked following the introduction of express ferries and a power grid. However, these waves of tourists largely concentrated in Big Island. On Small Island, attempts were made to open vacation rentals and develop touristic activities, but to no avail.

Since winter is harsh and summer wraps up with torrential storms, the inconvenient climate virtually isolates Small Island for two seasons every year. It only takes the slightest change in wind direction to disrupt ferries from reaching the island. Not only have the unforgiving weather conditions affected the number of tourists to Small Island, but also led to the departure of many islanders.

“My hometown is poor, thus the income from tourism alone fails to cover living costs. I have to find a new, different way to improve my business and tourism on the island,” said Sam.

For generations, the maternal side of his family stayed on Small Island and made a living as fisherfolk. Cottages across the Small Island fishing village collectively look onto the sea. A few steps from the front door and you are facing the ocean.

His maternal grandparents were ecstatic to receive him on the island. After hearing his plans, they unhesitatingly handed over the land in front of their house for him to turn into a homestay, it being the first time they had heard of the term.

With his grandparents’ endorsement, his own understanding of the island, and hospitality skills acquired from working as a hotel receptionist in Nha Trang, a coastal town in central Vietnam, Sam was confident of his career on Small Island. Besides, Sam estimated the competition to be relatively slack as travel lodges on the island were scant and amateurish. 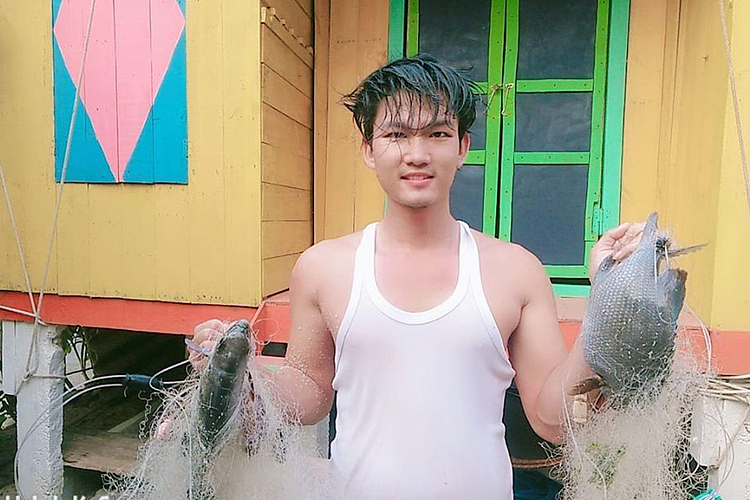 Two years following his penniless departure from Nha Trang, the 1993-born is now the proud owner of a four-bedroom seaside homestay. A popular pick amongst the younger crowd who enjoy personality at their stay, the property hosts up to 15 people at a time.

“Even with occasional challenges, I am now more financially independent being my own boss and in charge of everything than in Nha Trang,” said Sam. He remains unregretful. “If I had stayed back, I would still be in a shabby rental,” he ventured.

Travelers from Big Island can easily spot his waterfront property with its colorfully painted wooden walls. After the Lunar New Year holiday, Tet, Ly Son turned quiet and Sam had time to fix up the house. He designed and built the homestay. The process cost him VND200 million ($8,600).

Sam earned and saved money from giving island tours. Running a one-man business, he was simultaneously in charge of food and tours.

Customer Bich Ngoc’s first impression of Sam was that he was cold and quiet, scaring her off from having too many enquiries: “He showed us beautiful spots on the island and took unexpectedly awesome pictures for us,” she said.

Whereas Nguyen Thuy Trang, a well-known travel blogger who spent two days on the island, remarked the guide was enthusiastic, friendly, funny, knowledgeable, and calm.

The high percentage of female customers and foreign travelers Sam received make for interesting anecdotes. During busy seasons, delay in water and ingredient delivery results in complaints, with the homestay owner frantically stressing to find alternative options. “Sometimes, guests forget their bathing costumes or other personal items and I have to return it with a red face,” said Sam.

Small Island has dreamy, pristine beaches with crystal clear water weaving through unique black scoria rocks and vibrant coral reefs. Once arrived on the island, visitors typically head straight to the beach to take photos and contemplate the view. Upon further guidance, travelers rent round basket boats to go coral dive and frolic for a few hours but few, if any, stay the night on Small Island.

Knowing how to catch crabs, fish, plant, and dive, Sam got inspired by his daily activities to design cultural, well-rounded, and interactive activities for his guests.

“I think when travel is embedded with natural landscapes and local cultural activities, it becomes more personalized and alluring,” he noted.

When talking about accentuating attractions on the island, Sam excitedly tells of the wooden bridge his grandfather handcrafted. The idea came when he saw many guests were intrigued by the block of scoria rock out by the beach. They would trudge against the current to get pictures with the rock and either get splashed all over or trip.

For safe and easy access, his grandfather built a wooden bridge. Whereas visitors would only quickly stop by for shots in the past, they can now thoroughly indulge in the view.

In the evening, Sam brings homestay guests out to catch crabs: “I am certain this one-of-a-kind activity is unforgettable.” 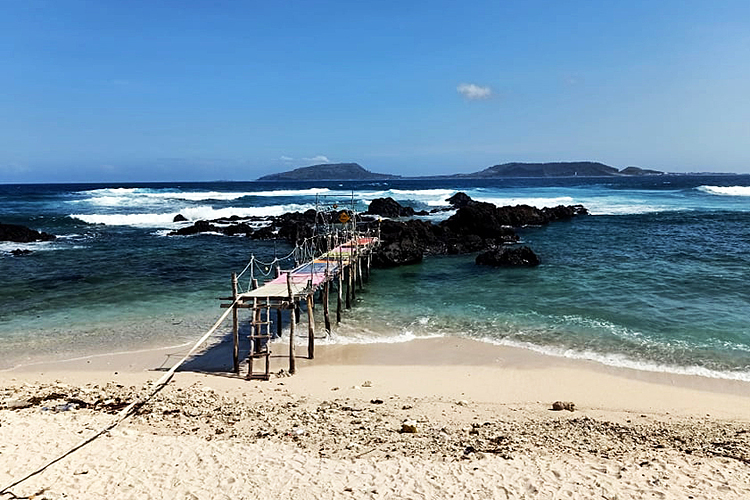 The small bridge hand-built by Sam and his grandfather has become one of Small Island’s main tourist attractions. Photo acquired by VnExpress.

Young, ambitious, up-to-date, technologically adept, and well-versed in languages, Dang Van Sam makes a striking impression on his younger guests. He hopes to gradually professionalize services on the island to boost the local economy as well as his income. Having a different mindset, other travel businesses on the island struggle to make a living. They wait for tourists to come instead of actively seeking and drawing them in.

In addition, Ly Son tourism lacks in diversity and hands-on activities. Thus, travelers who come only get to visit top tourist spots and miss out on interactive experiences. Sam plans to expand his business onto Big Island, develop services and create appealing spots for tourists. On top of managing his homestay and tours, Sam also sells ferry tickets and offers travel itinerary counseling.

During the island’s off-season, Sam spends his time traveling, staying at different lodges, learning from field experts to improve his hospitality knowledge and skills. He currently envisions an interactive homestay resort offering local adventure activities, suitable for backpackers. Specifically, an eco-friendly resort with bungalows is what Sam has in mind for the future.

“The island is only charming when it is clean and pristine. As summer approaches, I’m preparing to invite youngsters to come down to the beach with me and pick up trash. A lot of people enjoy and participate,” he said. 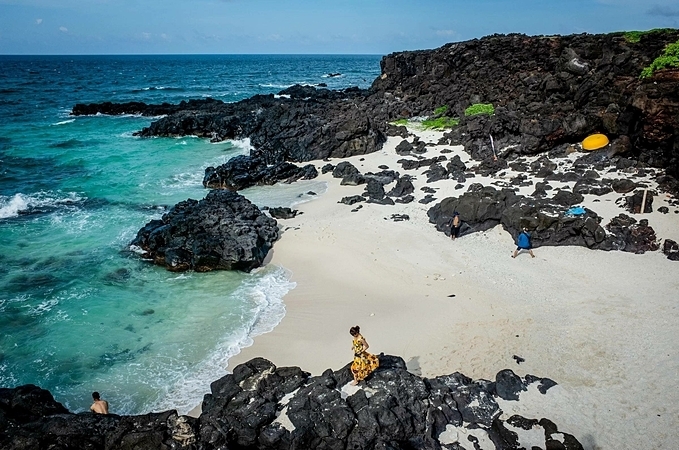 An aerial view of Small Island. Photo by VnExpress/Thanh Nguyen.

Due to the novel coronavirus epidemic, Ly Son is temporarily closed off from tourists. Sam immediately notified guests and canceled bookings when he received the news. “It is definitely hard to take in as we are in peak season and I have to cancel on many customers,” he said.

Ly Son Island insular district of Quang Ngai Province, lying off the south central coast, is only open for tourism when Lunar New Year festivities end through September, during which peak season lasts from April until August.

From above, Small Island has an oval shape. The island is roughly 0.7 square-kilometers in size with over 100 inhabitants and no freshwater resources. In 2016, the island received electricity for the first time.