After a cold winter spring comes in February with the occasional bright sunshine. It also brings to life buds, which burst into light pink peach blossoms. The flowers can be spotted from far away against a background of yellow cabbage flowers.

Visitors to Ha Giang now cannot help but fall in love with its winding mountain paths and ancient rock walls of the local people. And who can resist the liveliness of smiling children in the spring of their lives? 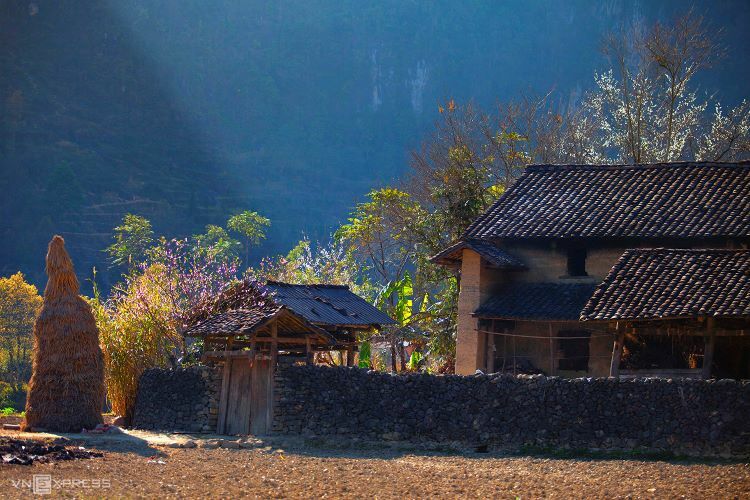 When you arrive in Ha Giang, you can rent a motorbike for VND150,000 ($6.5) a day to continue your journey. At the rental place, you would need to leave your IDs as a form of deposit.

If you have your own transportation, you can take National Route 2 to Vinh Yen Town, turn into National Route 2C past Tuyen Quang and Viet Quang towns to reach Ha Giang Town. This is the easier route, though slightly longer.

An alternative route for travelling by car is to take the Ha Noi – Lao Cai Expressway to IC4 point (toward Tam Dao) before continuing to Tuyen Quang Town and Vi Xuyen District and reaching Ha Giang Town.

From Ha Giang Town, you have to take National Route 4C to Dong Van Town, a 130-kilometre road on a difficult pass. Therefore, it is recommended that you should take four to five hours to do the trip, including time to stop and take in the scenery and a break. 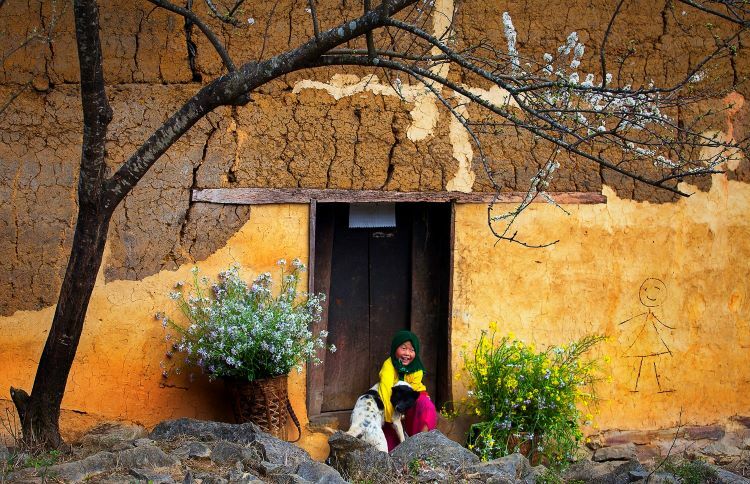 On the way to Dong Van Plateau, the first recommended stop is in Quan Ba District, which boasts beautiful scenes such as Fairy Mountain (Co Tien Mountain) and the famous Quan Ba heaven gate.

Sixty kilometers from Quan Ba District is Yen Minh District, famous for its beautiful pine forest. Here, 30 kilometers after you make a turn toward Dong Van, you will reach Tham Ma Slope, a popular photo spot with a winding road between two tall mountains.

If you continue straight, you will reach Sung La Valley, which is famous for many tourists attractions, including the house of Pao, the setting of the famous 2006 movie “The story of Pao”, and the Pho Cao Market where you can see 17 different ethnic groups.

Travel another 30 kilometers and you will pass through the well-known King Meo’s mansion to reach Dong Van Plateau. Here, you can walk around old streets with many century-old buildings. Pictures can be taken after first taking the house owner’s consent. Among the old streets is a marketplace with many snack and coffee places where you can take a break. 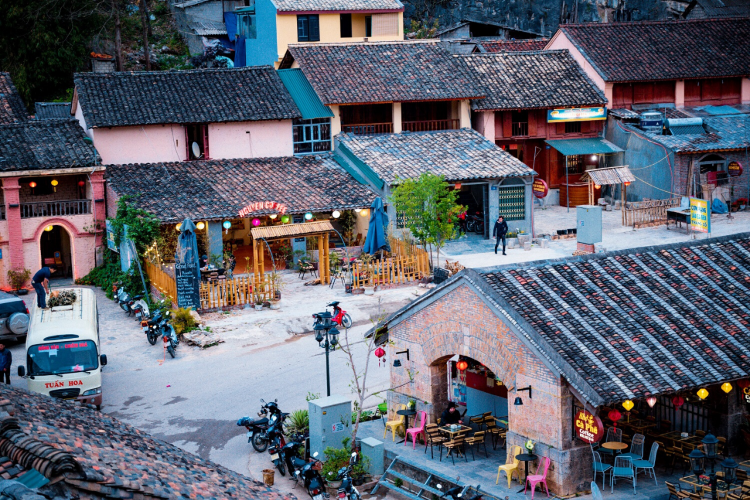 If you decide to spend a whole day in Dong Van, you should stop by Thien Huong Village of the Tay ethnic people with its many old buildings and ancient banyan trees. Another option is Lao Xa Village, with its flowers blossoming in spring.

From Dong Van Plateau, you should travel back toward King Meo’s mansion to visit Lung Cu Flag Tower. It is a rocky 30 km journey, but well worth the effort. The flag tower is only two kilometers from Vietnam’s northernmost point. You should stop at the parking lot and climb 389 stone steps and another 140 steps on a spriral iron staircase to get to the tower. 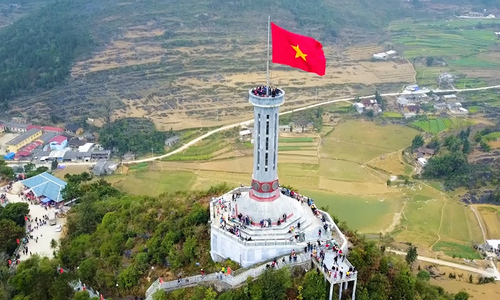 From there you should return to National Highway 4C and head for Meo Vac District.

On the way to Meo Vac, you will pass through Ma Pi Leng Pass, one of the narrowest and most challenging in northern Vietnam. Along its 30 km route, you will pass through a point from where you can see the Nho Que River and Tu San Gulf. Here you have the option to take a side route through Pa Vi – Xin Cai – Thuong Phung, where you can take a ride on the river (VND100,000-150,000 or $4.3-6.5 per person).

After you pass through Meo Vac Town and Mau Due Bridge, you should take a turn on National Highway 34 and continue toward Du Gia Village or another 40 kilometers through ethnic peoples’ paddy fields and red cotton trees.

It is recommended you make a stop at Du Gia, where you can enjoy watching locals go about their business and participate in the weekly local market on Sunday.

From Du Gia, go toward Duong Thuong Commune, passing through the Mien River before stopping at Lung Tam weaving village, where the ethnic Mong still sustain their traditional weaving crafts. This is the last stop on our suggested itinerary before you head back to Ha Giang Town.

What to eat in Ha Giang

There are many specialties in Ha Giang. One very special dish is the mountain-chicken noodles or pho, (VND35,000 or $1.5) that is usually sold near Quan Ba and Dong Van districts and is renowned for the meat’s firmness.

Ha Giang is famed for its au tau porridge made from the roots of the monkshood aconite plant. But this root is said to be poisonous and requires extremely careful preparation for putting in the porridge, together with pork trotters.

At Dong Van Market, the mountainous version of steamed rice rolls with bone broth and steamed Vietnamese ‘sausage’ (gio) is highly recommended. A few other options for breakfast here are the five-color sticky rice and buckwheat pie.

At night, as the temperature drops, a bowl of thang den, a local sweet soup, is a good idea since it has some ginger that could warm you up.

There are some specialties that you can both enjoy and take back as a gift, like the ethnic smoked meat, Chinese-style sausage and honey. 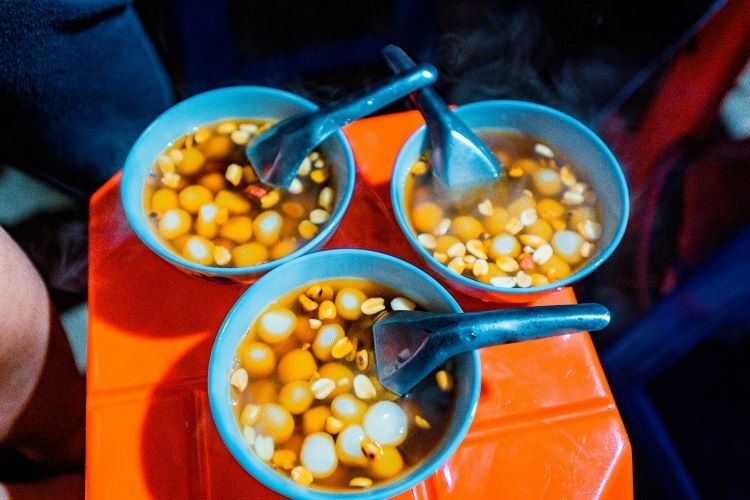 Where to stay in Ha Giang

There are a handful of homestays here, especially in Dong Van and Meo Vac districts.

My first recommendation would be the ethnic style Bui Homestay near Dong Van welcoming gate, which has three private rooms and one shared room. The rent per night ranges from VND100,000 to VND300,000 ($4-13) per person. Another similar option is Dao Lodge at Nam Dam Village, Quan Ba District.

At Meo Vac District, I would recommend Auberge de Meovac, a homestay created from an actual old house and with an ancient wall beside which tourists love to take pictures. The price here is VND330,000 ($14) per person for a dorm bed.

If tourists want a glimpse into the life of ethnic Tay people, Du Gia Homestay in Du Gia Village is the ideal place. It is, in fact, the village’s community guest house and set near a mountain and streams. Here you can fish in the streams and cook them yourself with the help of friendly locals. The price of this homestay is VND200,000 ($9) per person for a private room and VND70,000 ($3) for a shared room.

A few notes before you begin

Precautions should be taken seriously as you’ll be traveling on difficult roads and winding passes. Please refrain from traveling at night since there will be lights in few places.

Since the destinations are quite far from each other, please make sure you always have enough gasoline; remember to fill the tank at towns and Quan Ba, Yen Minh, Dong Van, and Meo Vac.

The weather is pretty cold in the spring, especially at night. Therefore, carry warm clothes, including windbreakers and sweaters. Tourists should also carry protective gear for driving as there are still a few unfinished sections of roads here.

Reservations for homestays would be highly recommended.

There are a few paid flower gardens along the roads. Please check before you enter to prevent any unwanted misunderstanding. 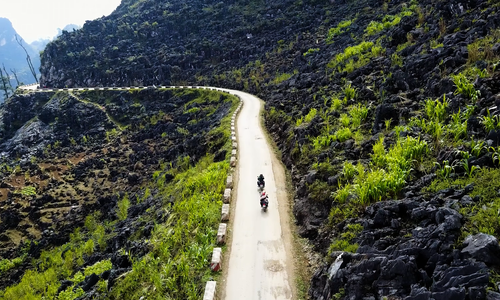 Road to Ha Giang: The journey is the destination

Road to Ha Giang: The journey is the destination. Video by Hung Bui, Minh Nguyen, Phuong Nguyen and Tri Le.